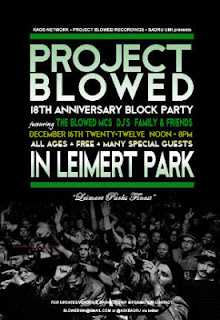 Project Blowed sponsored by KAOS Network held its 18th Annual Block Party in Leimert Park, Los Angeles, California on Sunday, December 16, 2012.   Known for its deep underground roots to Hip Hop Culture in Los Angeles, Project Blowed over the years has been home to such living legends such as Rifleman and Medusa (pictured below with young rap sensation Lil' Nay Nay).    Hundreds of people from near and far (London, UK) came out on a cold, cloudy and wet day.  Even on a bad weather day, the show went forward as local rappers graced the outdoor stage.

Numerous vendors selling T-shirts, art, incense and other items lined the sidewalk.  One tent was giving away childrens' toys  and clothing items to those in need. 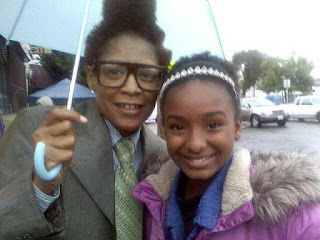 Lil' Nay Nay also volunteered to host for Ed Magik TV at the event.  She interviewed Medusa, Percee P, Rifleman, and  others.

Pictureed Below is a photo of Lil' Nay Nay with Executive Producer of Ed Magik TV, Ed Magik. 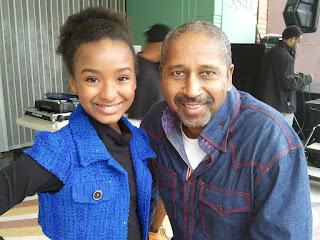 Video interviews will be published as an embedded playlist on this blog article in the space below.   An actual video of a performance from the event will appear on Elements of the Culture channel on YouTube.com.


@Blowedians
Posted by Ed Magik TV at 1:58 AM No comments:


LOS ANGELES  (Dec. 12, 2012) — Nominees for the 19th Annual Screen Actors Guild Awards® for outstanding performances in 2012 in five film and eight primetime television categories as well as the SAG Awards honors for outstanding action performances by film and television stunt ensembles were announced this morning in Los Angeles at the Pacific Design Center’s SilverScreen Theater in West Hollywood.

The 19th Annual Screen Actors Guild Awards® will be simulcast live nationally on TNT and TBS on Sunday, Jan. 27 at 8 p.m. (ET)/5 p.m. (PT) from the Los Angeles Shrine Exposition Center. An encore performance will air immediately following on TNT at 10 p.m. (ET)/7 p.m. (PT). Recipients of the stunt ensemble honors will be announced from the SAG Awards® red carpet during the tntdrama.com and tbs.com live pre-show webcasts, which begin at 6 p.m. (ET)/3 p.m. (PT).

Of the top industry accolades presented to performers, only the Screen Actors Guild Awards® are selected solely by actors’ peers in SAG-AFTRA. Two nominating panels — one for television and one for film — each composed of 2,100 randomly selected union members from across the United States, chose this year’s Actor® and stunt ensemble honors nominees. Integrity Voting Systems, the Awards’ official teller, mailed the nominations secret ballots on Wednesday, Nov. 21. Voting was completed at noon on Monday, Dec. 10.

Final voting information will be mailed via postcard on Friday, Dec. 31, 2012. The eligible SAG-AFTRA membership across the country, numbering approximately 100,000 actors, may vote on all categories. Online voting is encouraged. In keeping with the SAG Awards®’ commitment to sustainable practices, paper ballots will be available only upon request, which must be made by Monday, Jan. 14, 2013. All votes must be received at Integrity Voting Systems by noon on Friday, Jan. 25. Results will be tallied and sealed until the envelopes are opened by the presenters at the 19th Annual Screen Actors Guild Awards® ceremony on Jan. 27, 2013.

The complete list of nominations for the 19th Annual Screen Actors Guild Awards® follows. A replay of both announcements will be available for viewing on tntdrama.com and tbs.com.
Posted by Ed Magik TV at 12:36 PM No comments: