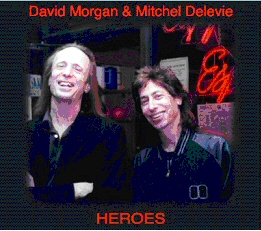 Mitchel Delevie Productions announces the official launch of the expected and praised Disk "Heroes of My Life".
The launch of "Heroes of My Life" was announced March 9, 2011 in Los Angeles California by the composers Mitchel Delevie & David Morgan.  The themes are interpreted for the recognized singer David Morgan and produced by the made famous musical producer, Mitchel Delevie.  David and Mitchel worked intensely in the recording of this disk by a period of more than 13 years.  The result is the extraordinary quality of the interpretation, production, lyrics and music of these songs that inspire, touch and move audiences everywhere.  "Heroes of My Life" is on sale in iTunes:  http://itunes.apple.com/us/album/heroes/id424936824?uo=4 (Click "View or iTunes" to buy the single or the disk)
The single version of "Heroes" in the "Festival Internacional de la Canción de Viña"(International Festival of the Song of Vineyard of the Sea 2007), performed in front of  500 million television viewers around the World, interpreted by David Morgan and Mitchel Delevie, is available in:  http://www.youtube.com/user/MorganDelevie?feature=mhum - p/a/u/2/nvTxC4cEX0w

Obba Babatunde Interview on the Red Carpet for NAACP 42nd Annual Image A...

Ernest Borgnine Actor Celebrity Interview on the Red Carpet at Night of ...

Dennis Haysbert Actor Interview on the Red Carpet at Night of 100 Stars...