Freeway Ricky Ross -- The Real Ricky Ross -- Ed Magik TV Exclusive Interview
By Ed Magik
June 2011
INGLEWOOD, California
Ricky Ross a.k.a. Freeway Rick is out of prison and he is now on a mission. to empower youth through the performing arts. After being sentenced to life in prison without the possibility for parole, Ricky Ross has been set free. The time that he spent in prison allowed him to transform from being illiterate to being literate. His determination to overcome his situation of imprisonment transformed into his freedom both physically and mentally. Ricky Ross has emerged from a life filled with danger and limitations into a life of hope and expectations not only for himself but for the youth.
Ricky Ross granted Ed Magik TV an exclusive interview where he spoke about his triumph and how he felt about situations that occurred during his stay in prison. He also spoke about his feelings towards William Leonard Roberts II a.k.a. Rick Ross, the rapper.
Also, in the late 2007, rapper Rick Ross, born William Leonard Roberts II, gave Ed Magik TV and True Magazine an interview at Def Jam Records.  There is clearly a dispute about Roberts' use of Ricky Ross' name, former character, and image.  Roberts, a former Corrections Officer, now wears his beard like Ricky Ross does.  An on-line article published by SOHH.COM ( http://www.sohh.com/2010/05/freeway_rick_ross_on_rick_ross_lawsuit_i.html ) explains that Ricky Ross seeks to get his name back from William Leonard Roberts II who uses the name Rick Ross under Def Jam Recordings music label.


Watch the videos below and take notice to the demeanor and attitude of both people, Ricky Ross (Freeway Ricky), and William Leonard Roberts (Rick Ross, the Rapper) .  Also note the time line of events.   You decide for yourself which person is being "True".
The interview was hosted by Ed Magik, creator and producer of Ed Magik TV (http://www.edmagiktv.com).
Location provided by Volim Couture, Inglewood, California, USA.
Special thanks to: Blaque Holiday, Aniesha McMillen, and FreewayEnterprise.com
Watch videos below.
# # #
Posted by Ed Magik TV at 11:37 AM No comments: 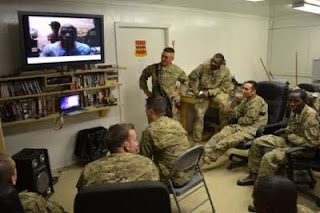 by John Martinez
Boxscore
September 4, 2011
While in the midst of busily training for his upcoming bout with Mexican powerhouse and WBC Welterweight title-holder Victor Ortiz (29-2-22KO), the undefeated six-time world champion of five weight classes, Floyd Mayweather Jr (41-0, 25KO), temporarily set aside his preparations holding a candid, yet lighthearted, Skype session on Friday with United States Soldiers serving in Afghanistan.
Despite his training schedule, Mayweather Jr. found the time to hold nearly two-hour discussion in which he appeared relaxed, confident, and in good humor prior to his September 17 HBO PPV fight.

“God bless you, thank you for fighting for this country... the red white and blue, there’s nothing better than this country, America - you guys are great, thank you so much… from the bottom of my heart.” Continuing, “You know, you guys are out there [fighting] in 120 degree weather so, if you guys can make [that] sacrifice, why can’t Floyd Mayweather make a sacrifice?” asked the Michigan born boxer to the Soldiers of mostly 1st Battalion 6th Field Artillery HHB “Hellions”(Task Force Centaur) and other Soldiers of Task Force Duke.

He was cordial and humorous even when he gave the deployed warriors a tour of the “Big Boi” Mansion. “Hey, y'all need anything? Let me show you house.” And with that, the Soldiers were granted a VIP tour of a dwelling that puts other people’s homes on an episode of Cribs to shame. From the built in waterfall to the large screen television hidden behind a picture to the closet that is a home within itself, Floyd proved that he lives his moniker, “Money.”

When Floyd finally discussed his upcoming showdown for the WBC welterweight title, he dismissed the punching power and chances of Ortiz with a laugh and a flash of a smile.

“Ortiz? Ha. Its gonna be easy work -like taking candy to a baby. I'm not worried about him at all, I have a lot of experience and I’ve been places in the sport [boxing] he will [probably] never go in his career.”

One Soldier asking Mayweather why so many of his fights have gone the distance at this stage of his career? Floyd responded by laying blame on the foe not wanting to engage him in a fisticuff scrap.

Continuing he explained, "Once I get to beating these guys and I take the lead, these guys go into survival mode. They try to say they went the distance with Floyd Mayweather instead of trying to go for the victory. You have fighters that will just settle and be happy that way. You know, you have fighters like Shane [Mosley] who hit me with a good shot. I bit down like a true champion and I kept fighting and what did Shane do? He went into survival mode. When I was beating [Juan Manual] Marquez, his corner could have easily stopped the fight but what did he do? He went into survival mode, so there’s nothing I can do. And when I faced Oscar De La Hoya, he chose to be the heavyweight gloves, he chose the weight class, so they are always putting me in a no-win situation, so, you know, all these guys work together. I’m a one-man Army. You know, you have all these guys working with certain promoters, and like I said before, I’m the trainer, the promoter, and the fighter.”

Despite a 16-month layoff, Floyd’s trip back into the ring promises to be  an event, victory, or both. His prowess is second to none. His defense is “impregnable,” but more importantly, like many others hypothesize, it seems like a tune up for bigger things.

“I’m working on the biggest contract ever!” he exclaimed. “Y'all know who it is.” To the delight of the packed room, Floyd began simulating the act of tying a tourniquet around his arm and pretending as though he was injecting a syringe into his veins.

“Poochiao (Manny Pacquiao) don’t want this. You know,” he claimed. With Pacquiao supporters amongst the gathered troops, Floyd exclaimed, “He can’t say nothing. He’s getting my left overs. I beat them [Manny’s biggest named conquests] all way before he got to them. What's he gonna say? I beat them in their prime and when they still had something to give. I got 'em first.”

When another Soldier questioned him on how he stays motivated, Floyd stood up in front of the camera, pulled 100 dollar bills from his pant pocket, numbering in the seemingly thousands, and flushed the screen with what could only be "chump change” to the world class fighter and entertainer. He described himself this way, “There’s talented and then there’s gifted. I’m God gifted. It doesn’t matter who they put in front of me. Others have been knocked down and lost.“

As the soon to be seven-time world champion ended his time with the troops, he did offer his political views on the conflict in Afghanistan.

“Everytime we get someone new in the White House, they always say they’re gonna bring you (Servicemen and women) home; well it’s time to bring y'all home. You know what I’d do? I’d be buying jets and sending them over there to pick you all up, that’s what I’d do. Gotta send the jets over there to pick y’all up and bring y’all back home.”

With all the bravado and swagger that only an undefeated fighter can possess, Floyd Mayweather showed he is more than just a self-promoting boxer. He proved he was a supporter of the troops and offered to put on an exhibition - meet-and-greet for the Servicemembers of FOB Salerno, Afghanistan after he makes “easy work” of Oritz and prior to his “biggest contract ever” against whom he hints is ”Poochiao.”

For more about Mayweather's session with the troops - Undefeated Mayweather talks upcoming title-fight with TF Duke troops in Afghanistan
Note: The Salerno Skype Session between the Soldiers and Floyd Mayweather Jr. would not have been possible without the sincere dedication, hard work, and cooperation of Kelly Swanson and Leonard Ellerbe. And a special thanks to Floyd for taking the time to answer questions from some of those who are currently serving in Afghanistan.
John Martinez is respected boxing writer who has interviewed many of the sport's top fighters. A regular writer for the Boxscore World Sportswire, he is an Afghan War veteran who is currently on active duty assigned to the U.S. Army Task Force Centaur PAO, S7 & S9, 3rd Brigade 1 ID, 1-6HHB.
Floyd "Money" Mayweather  vs "Vicious" Victor Ortiz Pre-Fight Press Conf...